What is good about Lotte Reigner’s work is how she uses basic silhouettes to show a story. Her characters are fitted with pins so they a can be easily moved, a much better method of animation than Dezso’s, though not as detailed.

The characters will be easier to move than Dezso’s due to the pins in the neck, arms, waist, legs and ankles so the walking can appear more natural.

Would add more character to the animation instead of being one slide that only shows just one scene of the story.

Growing up in an area thriving with Roman artefacts and architecture has helped develop my passion for the Ancient worlds. I was privileged enough to have access to a museum, which contained archaeological findings from Ancient Rome and Egypt. I was enamored with the Egyptian exhibit and the statuettes (known as Shabti dolls) that were buried with the deceased to accompany them to the afterlife. This was very interesting to me as a child – learning about the practices of this Ancient culture and how they differ from that of modern society; I wanted to know more. However, as I grew older, my childlike excitement for the ancient worlds steadily matured into a need for knowledge. I began to read books created by historical figures; ‘Mediations, book 5’ by Marcus Aurelius (a philosopher from Ancient Rome who studied Stoicism and was one of the five emperors to rule the Roman Empire), states “when you arise in the morning, think of what a precious privilege it is to be alive – to breathe, to think, to enjoy, to love” this gave me a new perspective on life: not to take what we have for granted and to find happiness in our lives, even if things get tough.
For leisure, I run a history blog that discusses different cultures throughout time, mostly focusing on Ancient Rome and The Vikings. Alongside running my blog, I also do illustration work, which is mostly influenced by historical art (Old Norse, Greek, Japanese…etc). In the Summer, I had the opportunity to visit the historical town Castleton and have a tour of Peveril’s castle – a castle created by Henry II in 1176.

After the completion of the course, I hope to further my studies by using my newly acquired knowledge about the Ancient worlds into another subject I am fairly passionate about: Archaeology. I want to be able to travel to Rome and help unveil the secrets that still lurk about this ancient civilization so rich with culture. This course will help me succeed as a future historian as it will give me the necessary knowledge I need to know about the Ancient worlds, along with building my confidence – encouraging me to join in with discussions and debates.

Like how she implements a lot of background objects to add character to her book – we could use this for our own animation to depict Manchester, maybe add a more Gothic look.

The use of shadow figures from paper cut outs would be useful in this brief because it would be quick and easy and could portray the story we have come up with.

Using different coloured LED lights could represent the mood that is present; could use a grey LED to show the gloominess of Manchester, a red LED to show a bad event, in our case, the gargoyles coming back to life due to the main character’s careless action, a pink LED light to show love.

Deszo adds a border to show the theme of her book – we could use this for our own animation by adding a border to relate to Manchester or gargoyles; buildings to show the town of Manchester, or trees as she has done with her books.

This piece of Reinger’s work was striking due to its intricate detail of the clothing and the accessories that adorns the character’s body. Most of Reinger’s work uses monochrome, so it is interesting to see a piece of her work have colour in the background – it makes the silhouettes the focus of the animation. What I like most about “The Adventures Of Achmed” is the unique theme she has decided to go for, completely different to the other pieces which were ‘fairy tale’ orientated. This animation style would definitely be the most beneficial for our project as we can show more details of our story without just selecting specific scenes we want to make an elaborate book of. It is also simplistic compared to the 3D book of Andrea’s, so within a short amount of time we would have a complete animation.

Reinger’s Tumbelina was quite interesting to watch: the detail compared to Andrea’s work – from the outfits of her characters, to the background, you can see a large change. I prefer the monochrome theme than including a coloured background (as she has done in her The Adventures Of Prince Achmed) as it almost adds to her theme. The black silhouettes are contrasting against the white/grey of the background, making the character, along with the additional decor,  become eye-catching to the audience. 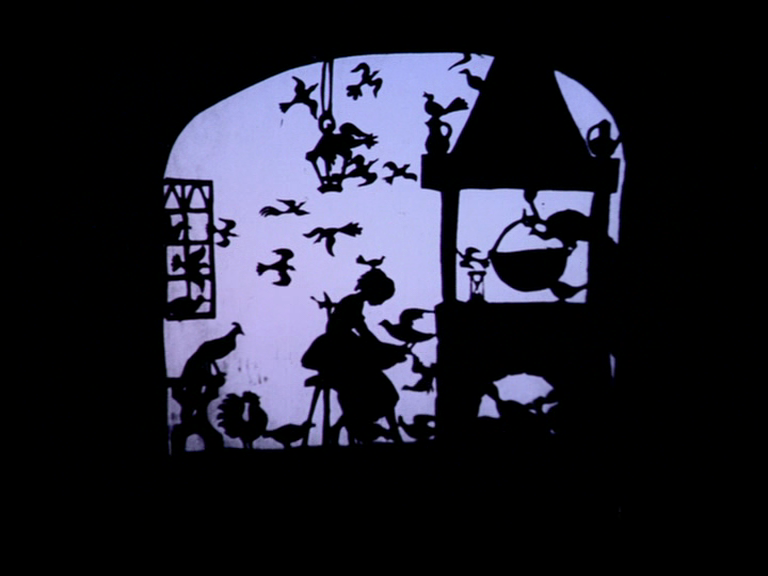 Lotte’s and Andrea’s work are similar in the way they use silhouettes in their work to show their animation or book. They use a background that is lighter than the actual characters/decor to make them stand out to the audience. Both of their work also contain intricate detail to add more character to their scene. However, there are some differences. The most obvious is that Andrea’s work is just a tunnel book that only shows one scene of the story – something which could be used for our animation, but is very limited. Lotte’s is an animation which is malleable and can show more of the story and adds more detail to the scene. 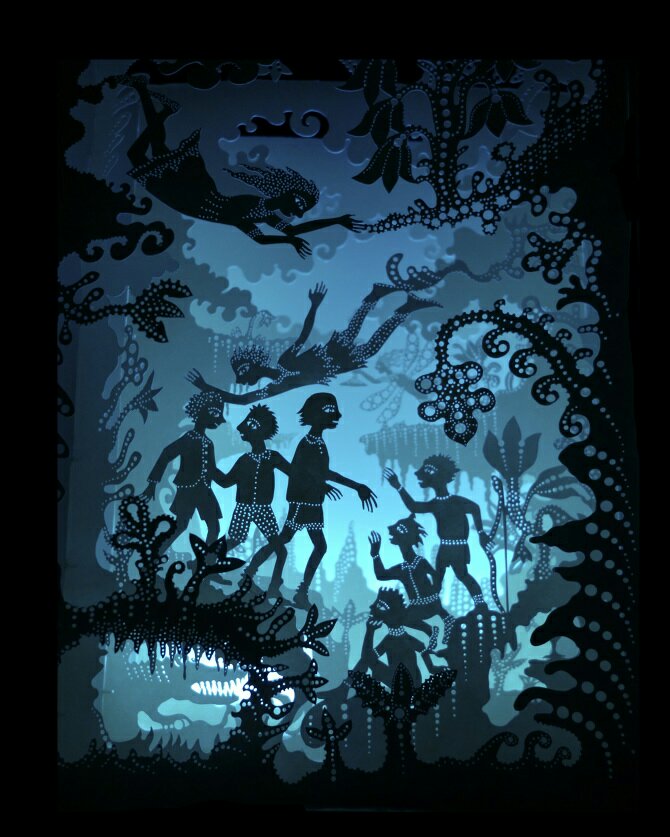 Out of Deszö work, this one was definitely the most eye-catching. She uses circles to create unique patterns – almost reminiscent to that of the Aztecs and their style of art. I enjoy the layering of her scene, showing depth by making the objects within the back appear further away than they actually are. From one scene, it tells a whole story, something that my group could take into consideration.

Why I chose this picture mostly was because of the choice of LED light she decided to use. In her other works, she mostly uses the standard brightbulb LED, but in this one, she decided to use blue. It adds a unique atmosphere to the scene, giving you a set emotion about the book.

For the brief, this could be used to show important intervals in the story; the main character going into the cathedral to take the stone, the gargoyle taking the stone and taking it to John Ryland’s library, the wizard making his appearance. However, it is too limited and would leave out small details that could help build up the story and intrigue the audience.

For this paper-book, I like the theme she decided to select (mythical and woodlands) as it adds a somber tone to the book – the grey LED adding to the atmosphere. I particularly enjoy the border she decided to add to each book, framing the whole image and its content inside. Like in the other book I discussed before this, you can clearly see the depth perspective as she was trying to show which is closer to the audience (the black outline) and what is further (the faint grey outline)

I particularly enjoy this piece by Dezsö due to the theme it is portraying: innocent and evil. We see a little girl playing happily with her goat while the devil lurks beneath the grounds, maybe being a double meaning that evil can always be witnessed by kindness. The atmosphere from the light, a musky yellow, sends a feeling of dread into the audience as it is a colour that reminds you of fog – an ambiance related to that from horror movies.

I like the splitting of the two-sides: one showing the innocent little girl, playing happily with the lamb without a care, while the other is a demon, something we associate with everything evil and nasty.

Tyler Adams: A troubled teen from the town of Manchester who secretly has a big heart. His normal attire consists of a long black, leather trenchcoat adorned in several band pins, skinny black jeans to match that of his coat and black combat boots; his attire is that of a stereotypical emo/goth teen.

Tyler is often bullied at his school for his difference in appearance and attitude,